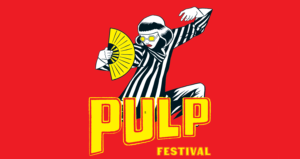 “ALICE GUY, THE UNKNOWN OF THE 7TH ART”

Who knows Alice Guy? This Frenchwoman born in 1873 is nothing less than the first female director! The one who thought, imagined, felt that cinema would become an art and the best way to tell stories. With nearly a thousand films, the densest career of the time, the only one conducted on both sides of the Atlantic, this pioneer was literally erased by film historians during her lifetime. This film paints the fascinating portrait of an ardent and visionary woman, who has never stopped conquering new territories, to end with one last dream: to reclaim her destiny. He finally gives him the floor to tell his version of the story and find his place in history. From personal and unpublished archives of Alice Guy, period archives, her films and animated illustrations by Catel Muller.

Partnership with the Pulp Festival

The Pulp festival – first European festival of multidisciplinary creation around comics – is devoting an exhibition to Alice Guy and will broadcast our documentary on Saturday April 9 at 4.30 p.m. In a fairground atmosphere, between original drawings, films and objects, the visitor immerses himself in the creative boiling of the beginning of the 20th century.

Audience record for “The roundup of notables”